I’ve been inspired by Earlham Early Years Centre ever since I visited as part of a Learning through Landscapes team supporting the conference celebrating their newly completed garden in 2003.  The story of how this garden came about, showing vision, courage and a commitment to carrying out what they believed in, was an inspiration in itself.  I particularly loved how they were able to vastly increase the size and topography of the garden, and the team’s personal boundary-pushing in providing a landscape where children might not always be visible!

Over the years Felicity and Steph became good friends, and in a return visit I made 9 years later I was astounded to see how the long-term thinking and visioning had grown into one of the most magical nursery gardens I have encountered.  I’ve included some ‘before and after’ images in this post to illustrate just how much taking a long view on planning can pay off.

So, I’m so delighted to be sharing the news that they have laboured long and hard to gather the long story of Earlham Nursery School from its beginnings in the 1930’s, and crafted this into a book demonstrating just what a Nursery School should be like and be doing – telling these stories and a great deal more.  With the help and support of The Froebel Trust, this is now free to access as a digital download:

“In Growing a Nursery School from Seed, Stephanie Harding and Felicity Thomas tell the inspiring story of Earlham Nursery School, the development of a magical school garden and reveal how they shaped a creative Early Years curriculum. Felicity Thomas and Stephanie Harding are experienced educators and headteachers who led Earlham Nursery School for 20 years; they are passionate about a Froebelian approach to early education and the importance of nursery schools in the education system.”

Growing a Nursery School from Seed: the first 75 years by Stephanie Harding and Felicity Thomas (Froebel Trust 2020) can be downloaded as a free PDF via the Froebel Trust website.

The excerpt they share in this post describes how the social and educational thinking of the time expressed itself in the design of the new build (not long before the second World War began), with such awareness of how indoors and outdoors work in partnership.  This understanding could be better influencing architectural thinking in educational settings today!

Of course, I recommend that you read the wonderful story of how the garden at Earlham was developed in their chapter on ‘The Garden and Beyond’ too.  If you are interested in leadership, then you should definitely read the whole book!

You can watch a recording of the webinar that the Froebel Trust hosted as a launch event for the book, hearing directly from the authors and their ‘critical friend’ Marion Whitehead.

Felicity and Steph also wrote an excellent chapter on ‘The Role of Play: play outdoors as the medium and mechanism for wellbeing, learning and development’ in the book I edited to bring to life the Shared Vision and Values for Outdoor Play (Outdoor Provision in the Early Years, Sage 2011 – available for 20% off through our collaboration with Books Education).

The architecture of Earlham Nursery School reflects the thinking around Nursery Education during the time of its planning and is an example of Margaret Macmillan’s influence on architectural design. It opened on 11th May 1939 on a newly built estate with a high population.

Myles Wright and Gardner-Medwin, in their book on the design of Nursery and Elementary Schools (1938), recommended Nursery schools not become too large. Their advice differed from the Hadow Report, advising that the maximum size should be provision for 120 children of 2 to 5 years averaging four groups of 30 each. ‘Semi-open–air buildings’ and ‘garden playgrounds’ should be provided to secure “the essential conditions of fresh air, sunshine and light.” The design of Earlham Nursery School reflected these concerns in its airy, full length, south aspect Crittall windows that folded open to the outside.

The Hadow Report (1933) recommended that “The nursery school building should not be ‘institutional’ in character, but as far as possible of a light and open ‘garden pavilion’ type.”. This idea that classrooms should be open to the air and children allowed to play actively and mix socially demonstrated a commitment to the social importance of Nursery Schools. It showed a move away from a Victorian model of rows of desks where infants were dictated information by older children, learnt by rote and exercised in a yard.  This old model was industrial, hierarchical and sedentary. The newer inter-war model valued social and physical education alongside cognitive development. It also recognised the importance of an architectural design that included stimulation of the senses. This was demonstrated in the importance shown to light, to air flow, to sand and water play experiences and in offering opportunities for social play inside and outdoors.

Open air schools, which informed primary school architecture in the 1930’s, had their origin in a school established in a pine forest in Charlottenburg, Berlin in 1904. A report on this school was published by London County Council in 1907 and described the emphasis on teaching, exercise, solid meals and afternoon rest with most lessons taken outdoors. The school buildings comprised of one hut open to the south used for sleeping on wet afternoons and two other huts open on all sides for meals and teaching in wet weather. The report told of the increased weight and growth of the children and because of these positive health outcomes it was copied in school buildings in London. At the same time research on children’s eyesight at the time implied that poor school lighting was causing harm. The response to this was an increased support for open air schools and architects began to include glazed walls and clerestory lighting in school design.

Macmillan was strongly motivated by the need to provide a healthy and safe place for children who were living in slum conditions. In her book ‘The Nursery School” (Macmillan, 1919) she outlines a plan for the building of a Nursery School which she saw catering to the needs of 0 to 7 year olds. The access to light and the free flow of air in the classrooms in order to prevent Tuberculosis and other diseases was a key feature. In Earlham Nursery School this concern is reflected in the folding, wall length windows, in the south facing front aspect of each classroom and the clerestory windows at the back and front of the building to allow for catching a breeze.

Froebel’s influence on the architecture is evident through the appreciation of the importance of the natural world and the promotion of social and physical development. It was particularly expressed in the design links to the garden. Each classroom faced the garden and had access to the outdoor area through steps which ran up to and down from the sills of the folding playroom windows. All of the playrooms faced onto the garden, with the bathrooms, cloakrooms, kitchen and administrative rooms placed behind. This prioritised the children’s access to the outdoors, acknowledged the learning potential of the garden and recognised the health benefits of access to the natural environment. 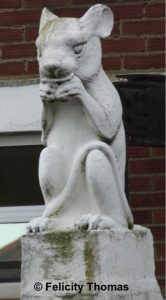 The built resources in the garden indicate an appreciation of children’s sensory development: these included two large sand pits, a paddling pool, brick seating and a grassed area.

Children’s interest in the living world was encouraged by providing a bird bath. There is no direct evidence for pets but Myles Wright and Gardner-Medwin recommend special provision for domestic animals “.. they must be given plenty of space, and the best place for them is not near the playroom windows.” (1938, p. 24). There is evidence of animals from the School Log Book of the 1950’s and 1960’s to budgerigars and an aquarium for fish, later in the early 1970’s a guinea pig is recorded. The bird bath and possibility of pets show that observation of living things and possibly life cycles would have been part of the curriculum.

The attention to a child’s point of view is reflected in the external decoration;

“.. figures representing squirrels, rabbits and “Mickey Mouse” are placed above the sheltering canopy and serve to differentiate the Playrooms”. (City of Norwich, 1939)

They remain to this day and have been repaired and added to over the years although the description of the mouse as being like the famous cartoon mouse is surely mistaken!

The design of the school fostered a sense of a school community reflected in the spatial characteristics of the school. Using a single story layout and shared spaces demonstrates an interest in the social life of children. The large, shared space of the garden onto which each of the classrooms faces is a place of meeting, a public place reflecting a democratic approach to play by offering each class equal access to the garden. This also had a pedagogical role in supporting the development of wider social relationships and fostering group interaction, play and friendships. 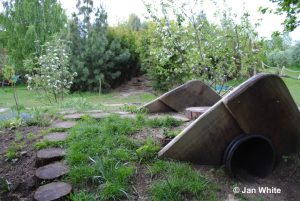 The architecture of Earlham Nursery School reflects the progressive approach to early education influenced by Froebel and Macmillan that prevailed during the 1930’s and was actively supported by the government through the findings of the Hadow Report (1933). It was a view that harnessed both health and educational approaches with a focus on continuity from the antenatal stage up to the end of junior education. This view prioritised children’s needs over those of the adults working with them and encouraged a pedagogy which was flexible, playful, creative and supported curiosity, an interest in the natural world, healthier physical development and social interaction.

Images are all (C) Felicity Thomas or (C) Jan White and must not be used without written permission from the photographer or Early Childhood Outdoors.