As our inaugural international speaker at the launch of Early Childhood Outdoors in April 2018, Erin Kenny reached the hearts of many of those belonging to the ECO meshwork. A year has now passed since Erin finally lost her determined battle with cancer, and she is missed dearly and daily. But the legacy that grew to be so important to her, as The Cedarsong Way, lives on.

With the permission and encouragement of Erin’s family, we are so pleased to be able to share the interview Erin did with Kathy Brodie for the Early Years Summit on Outdoor Play in the spring of 2018.

All funds raised from purchases of EY Summit materials through the link below will support scholarships for The Cedarsong Way trainings provided by the Cedarsong certified centres across the US which are continuing Erin’s life work.

Just two weeks before her death, this article by Susan Reimer was published in her local newspaper, the Vashon-Maury Island Beachcomber http://www.vashonbeachcomber.com/news/vashon-educator-draws-lifes-work-to-a-close/

A decade ago, on 5 acres of old growth forest near the heart of Vashon, islander Erin Kenny started something rarely heard of at the time: an outdoor preschool, where children, come rain or shine, spent their school hours entirely outside. Since then, the Cedarsong program has taken root and flourished: More than 400 students have attended the school in the trees; Kenny has written three books, trained hundreds of people in the school’s educational philosophy and practices, and traveled to several countries, teaching “The Cedarsong Way.”

Soon it will be up to others to carry her work forward, as Kenny, 58, is battling cancer and recently learned that her life will be cut shorter than she, and her many supporters, had hoped. Last week at her Sunrise Ridge home, with sun streaming in through large windows and the colors of fall vibrant beyond them, Kenny talked about her journey, from nature-loving child, to lawyer, to teacher, to sought-after speaker in the United States and across the globe.

Kenny says her message is about more than nature and includes the importance of life skills, such as compassion, kindness and respect, which are all important to instill before age 5 — and all are central to the school’s teaching.

“One of the biggest causes of today’s social problems is a lack of empathy and compassion,” she said. “ If we start to instill these deeper qualities and values in children when they are very young, if we connect them with themselves and their own feelings, if we connect them … with respect for others and with respect for nature, if we build on these inherent and innate qualities children have, that is how we are going to change the world.”

Kenny grew up in New Jersey and spent summers in Ontario, Canada. Like many children of the 1960s, she spent hours of unstructured, free time outside. The lessons she learned then carried forward and propelled her to become an attorney, hoping to practice environmental law — a profession she quickly shed when she realized she would need to spend too much time inside. She later became an ethnobotanist and bought her 5 acres of land in 2000. The next year, she began offering Camp Terra, a popular outdoor summer camp that more than 1,500 children have attended from as far away as New York and England.

Kenny took a job as a nature and science teacher at an island preschool a few years later, and when it closed, the children joined her for the 2006-07 school year. With those students and her own young son Shanikai, she began Cedarsong Preschool, where children spent about two-thirds of their time outside and had unstructured free time to learn, play and explore. It was a precursor of what was to come.

With her friend Robin Rogers in 2008, she opened Cedarsong Forest Kindergarten, where children were outside all the time, with no lesson plans or structure, and children’s interests and nature led the way. A handful of island families chose the school.

Islander Elizabeth Fitterer remembers that time. Her daughter Lorelei was not quite 3, and Elizabeth knew she wanted non-traditional education for her, calling Lorelei “a loud and proud” child.

“She just ran in there,” Elizabeth said, recalling the first time they went to the school and met Kenny. “I knew it was a great energy match for my daughter.”

Lorelei says she does not remember many preschool experiences, except for playing with mud, making mud pies and having a mud restaurant, but she has remained connected to the school throughout the years, attending summer camps and, in recent years, serving as a mentor at those same camps. A highlight for her as a mentor, she said, was helping a young camper with autism make a bracelet for his mom and seeing how happy she was to receive it.

Cedarsong does not just draw students from Vashon; in fact, Kenny said about two-thirds have come from off-island. Emily Ridge’s two children are among them. The last four years, once or twice a week, they have made the trip from Belfair. Her two children have sensory processing disorders, she said, and a traditional preschool would not have been an option for her daughter. She was extremely active, Ridge said, recalling that one of the photographs Kenny provided from her earliest days at the school showed her daughter stretched out on the earth, eyes closed.

“I was unaccustomed to seeing her so still,” she said. “I thought the forest is providing everything she needs right now.”

A couple years after opening, the school garnered considerable attention from a wide range of media.

“It mushroomed beyond my wildest dreams,” Kenny said.

In 2010, with educational trips to Germany and The Netherlands behind her, Kenny reached out to The Seattle Times, and a tidal wave of publicity ensued. In addition to the Times’ article and accompanying video, KUOW did a story of its own; the Associated Press covered the school, and several papers across the country picked up the article and ran it. The list went on: Sierra magazine, ABC’s Nightline, UK Daybreak, Evening Magazine and People magazine, which did a two-page spread — coverage, Kenny said, that left her speechless.

Kenny professes there is no bad weather, only poor clothing choices. To that end, the school had an assist from Bogs Footwear, which has provided boots for the school for several years and last year supported Cedarsong with a $5,000 grant. What’s more, Bogs has created a Cedarsong boot, to be distributed through REI; it will soon be on the market. The company will donate $5 to Cedarsong for every pair sold.

David Cook, head of marketing at Bogs, said Kenny and the Cedarsong program were instrumental in the company developing what is now a national program to supply boots and funds to outdoor educational programs. He noted that seeing kids using the boots “to their fullest potential” influenced that program.

“It was inspirational and opened us up to possibilities and the learning that goes on in the outdoor environment,” he said.

Others were also inspired. As word spread about the school, Kenny said that she received many emails from people who wanted to observe.

“I realized I was onto something, what I was developing was becoming the U.S. forest kindergarten model,” she said.

In response, she developed teacher trainings, and once a month for the past seven years more than 450 educators, guidance counselors and others have come to the school to learn about The Cedarsong Way.

Kenny has also developed a strong international following. A study group from Australia is expected to visit the school soon, and another is coming from England in the spring. Kenny has received invitations to travel the world and speak about her work and the education model she helped pioneer. Recently, she has fielded requests to conduct her teacher training in Italy, Brazil, England and South Korea. Just last month, she flew to South Korea, after being invited by the Sisters of Charity, nuns who run orphanages and schools and want to follow the Cedarsong model.

Now, it is clear that Kenny’s time is short. She has battled cancer for three and a half years and has endured four rounds of chemotherapy. Two more courses of chemo are an option, she said, possibly buying her six months each; if she chooses no further treatment, her time could be as short as three months. Last week, she was weighing her decision — and planning a last trip to Iceland for an educational conference there.

She has also made plans to close her school at the end of this school year and to sell her land to a neighbor, noting there is no one she would have rather have it go to. He will preserve the land, where the children have left their own kind of imprint.

“The energy the land holds, from nearly 20 years of laughing children, excited and happy — the land feels really alive,” she said.

Kenny says she believes that everything happens for a reason — but she does not understand the reason for her cancer and her shortened life.

“Maybe,” she said, “my message will travel even farther.”

People from around the world, as far away as Greece and Turkey, have contacted her, telling her what a difference her teaching has made in their own work. Her hope is in them to carry on her mission.

“They have been so inspired in those countries that they are going to be the message bearers — passing the torch,” she said. 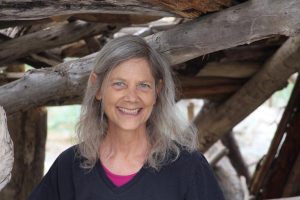 ECO Annual Gathering 2020 is in Sheffield on Saturday 28th March.

Join us as we continue weaving the Early Childhood Outdoors meshwork through keynotes, discussions and connections.

4 thoughts on “Celebrating the lifework of friend and inspiration, Erin Kenny”