Our long-postponed research seminar, hosted as an online webinar in collaboration with the Froebel Trust last Saturday, was a great success and a marvellous way to initiate a range of actions that we might take over the coming year or so.  Thanks so much to Carol Duffy, Dawn Jones, Dr Nicola Kemp and Dr Jo Josephidou, who presented their fascinating research – and of course to Dr Sacha Powell and Victoria Arneil for such welcoming and expert hosting.

311 people participated (with almost 500 registrations who will be able to catch up via the recordings) from Brazil, Columbia, Dubai, USA, France and all over Ireland and the UK, taking ECO more international than ever!  It’s clear from the very lively webinar chat – and more questions than we could respond to in the limited panel time – that there are many leads to pick up on regarding research, provision and practice for babies and toddlers in the outdoors.

As we review all the chat comments and questions raised we’ll be looking at what we could do in response – and over the coming weeks we’ll be considering what we as a meshwork and in collaboration might be able to help happen.  Included in the post-webinar survey sent out by the Froebel Trust is an important question: “What would you like to see happening nationally for increasing the attention on babies and toddlers outdoors?”  Please let us know your thoughts by responding to the survey monkey, commenting below or emailing us at info@earlychildhoodoutdoors.org

Standing out on the day was considerable interest in:

Recordings of each presentation and the short follow-on panel discussion will be available to view on the Froebel Trust website from next week.  I do encourage everyone to take a look! 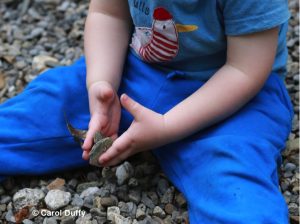 Along with her lively presentation ‘Noticing Infants intra-action with the more-than-human world’, Dawn Jones generously shared one of the ‘event’ records that form part of her PhD study as a webinar ‘handout’ and re-presented here on the ECO blog.  She purposely does not include photographs in the event record; instead intending to let the reader form their own visual imagery from her detailed written record.

Dawn’s post demonstrates how the thinking and learning done during the research process so powerfully increases one’s ability to see the intricate detail in what is taking place between the child and the world (objects, gravity, air, sound and so on).  Carol Duffy also concluded in her post that her research and the experiential learning she gained from it had a profound impact on her personal and professional life, affording her a new way of seeing babies and young children outdoors.

It seems clear that every experience young children have in and with the world is incredibly rich and meaning-filled.  Our role must surely be to become ‘fascinated companions’, giving ourselves time for increasingly noticing the depth of conversation infants are having with their world every single moment, the relationship each individual is forming with the world and how it is in fact forming the child as the child acts upon it: ‘becoming’ together.

The grey stones by Dawn Jones

The term ‘event’ used with in the following extracts explains the conjoining of materials and people and the following dialogue that happens between them (Richardson & Walker, 2011).

Throughout this intra-action a rhizomatic process is taking place – that the grey stones, water and Charlie are in a state of ‘becoming’ through the encounter (Deleuze 1994).  Therefore that through the continuity of each touch, look and movement there is no beginning or ending.   Further that Charlie’s play has been instigated by his ‘material surroundings’ (Rautio, 2013, p.399).

Charlie is 14 months old.  The following event took place in my back garden and was captured during my pilot study.  This event caught my eye purely because of the stillness of Charlie.  The stillness seemed to indicate a significance.  I use the term significant here to identify a moment in Charlie’s demeanour that alerted me to the possibility that something may happen, so something different within his play that warranted my observation.  So I stood back and let the event unfold.

The grey stones are a collection of beach stones collected by me for no other reason than they called to me to be held and carried in my pocket and not be left behind.  This type of behaviour is referred to as autotelic, internally motivated actions, the pleasure is in the activity itself (Rautio, 2013).

So a small pile of grey stones sit on the edge of a path, only this time they have spoken to Charlie.  The grey stones and Charlie then proceed to intra-act.  The grey stones call to be held and felt, Charlie sits still, he makes no sound, his hands in his lap and with his head slanted to the left looks at them taking his time.  Charlie is drawn to, not the one on the top of the pile but the one underneath.

Why is this, I wonder?  Is this Charlie’s choice or is the stone making the decision, could this be as Bennett (2010) discusses that the autotelic practice occurs through the openness of the Infant within the encounter?

The rounded bottom is protruding, he moves the others gently to the side using both hands and then looks at the grey stone, and this one is shaped like a flat pear and is smooth.  Charlie pulls it towards him, he needs to use two hands.  He holds the grey stone over his two little hands and feels it, his thumb runs over the side edge and he adjusts his balance to accommodate the grey stone’s weight by shuffling upon his bottom and shifting his back.  He sits still and looks at the grey stone.

The grey stone invites him to touch, to explore the surface, to feel the coldness.  The play continues as the shape of the grey stone which resembles a pear (so narrow at the top and more rounded and wider at the bottom) invites Charlie to feel the weight, he moves the stone to the right hand and then back to the left feeling the weight.  The shape of the grey stone is heavier/wider/ thicker at the bottom and lighter/narrow at the top, the grey stone and Charlie consider this together as the passing from hand to hand, pausing and repeating of this action continues.

The intra-action I think supports the point that the behaviour that is occurring is influenced intentionally, by chance and by all parties within the event; therefore the human is not the sole author in this occurrence (Rautio, 2013).

The surface responds and reacts to the trickles and the surface ripples.  The ripples invite further intra-action and the event continues for over a minute.  Charlie then bends down and splashes the water with his right hand and for the first time vocalises within the event.  He chuckles and repeats splash.  The water and Charlie continue repeating again and again.  The water invites further intra-action as the level of the water changes from the force of Charlie’s hand movements rising up and falling back down.

I wonder if I am witnessing what Bennett  explains as accepting the human is part of ‘vital materiality’, that we are ‘vital materiality’ and are surrounded by it (Bennett, 2010, p. 14).  Vitality of materials therefore means the capacity of all matter, that it is non-passive, that is active alive and as Bruno Latour expresses as an ‘actant’ capable of producing effects that then may alter the course of action (Latour, 2004, p.237).

Charlie then becomes quiet he kneels down and bends over to retrieve the grey stone using both hands.  This time though the water and the grey stone invite an intra-action that sees a fluidity between all parties.  Charlie drops the grey stone.  It splashes into the water with the water raising up falling and splashing over the edges of the metal tub, and makes a noise, along with a momentum along the surface of the water.

Is this, I wonder, what Barad means when she discusses being-of-the-world (Barad, 2007, p.160). Therefore how each intra-action directly relates to the next, as each one provides difference, a slight change, as the matter or the grey stone or the water is an active agent within the occurrence.

Latour, B. (2004a) Politics of Nature: How to Bring the Sciences into Democracy. Cambridge, MA: Harvard University Press

Photographs are (C) Carol Duffy and must not be used without written permission from the photographer or Early Childhood Outdoors.