Everyone knows the term Kindergarten, and most likely knows that this term meaning ‘Garden of Children’ was invented by Friedrich Froebel – but not so many will be aware of just how rich and profound Froebel’s thinking was, and just how deeply this understanding is woven into early childhood care and education today.

Of course, Froebel’s emphases on nature and movement resonate strongly with our current thinking about the outdoors as a powerful environment for learning in the early years, and observation clearly shows that both of these matter a great deal to young children.  But there is so much more we can learn from the perspectives and attunements that a Froebelian approach provides, for working out how to nurture young children in partnership with the outdoors.

This week’s post, from Froebel Travelling Tutor Felicity Thomas, introduces a strand into the Early Childhood Outdoors blog that helps us begin to explore how this deep and valuable awareness operates in everyday practice outdoors – there will be more posts on this from Felicity in the future.

If your interest is sparked for further reading, I recommend the free downloadable pamphlet by Helen Tovey, A Froebelian Approach – Outdoor Play and Exploration from The Froebel Trust.  There is also a chapter on ‘the nursery garden and play outdoors’ in Helen’s book Bringing the Froebel Approach to your Early Years Practice (2nd edn. 2016 Routledge).

Learning in the outdoors and listening to Froebel by Felicity Thomas

I was the head of a Nursery School in Norwich.  The setting for this school was in the middle of a 1930’s social housing estate.  The houses went around a large field of about 14 acres.  The nursery school and the primary school were situated in this field.  These schools were single storey buildings with the classrooms opening onto the outdoor space.  The primary school had a family clinic in the middle of the building to insure that the needs of both education and health were met.

The schools were built at a time in our history when the council and the architect worked together to respond to the needs of young children and their families as set out in the Hadow report of 1933.  This report was influenced by leading early education theorists, Margaret MacMillan and Susan Isaacs.  Both in turn had been informed and influenced by Friedrich Froebel (1782-1852) of the Kindergarten movement.

I too have been informed and influenced by Froebel, having gone to a primary school where all the teachers were Froebel trained.  I was lucky to do my own teacher training at the Froebel Institute in Roehampton.  I do not believe I would have become a teacher if I had not been successful in getting into this college.

In this post I would like to tell you a story of when I first went to the Nursery school in Norwich, which I believe illustrates the following Froebelian Principles:

In the autumn of 1997, the nursery school had its first Ofsted inspection. I was able to use the head teacher’s report to highlight areas that I was finding hard to improve and develop. One of these areas was:

This garden was never used because it was ‘out of sight’.  It had a gate and fence and was perfect for developing a small wildlife garden with a pond.  It was agreed at a staff meeting that this would become a project involving the children and their parents.  Many parents were interested and some had real expertise in ponds and pond life and also trees and shrubs.  We used their expertise to help us and we gathered their ideas, and some were willing to give time to help dig the pond. It was the digging of the pond that expanded this project into a rich learning experience for the children and developed connectivity with the community. 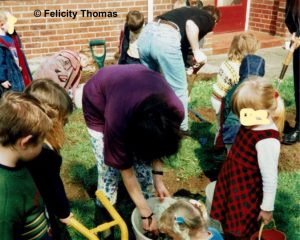 A little girl was digging with her mother when she found a very white stick. “What is this?” she asked me. I said I wasn’t sure, but it could be the bone of a dead animal. She was immediately interested and we started speculating about what animal it could have been. I said, “Let’s ask Steph, because she used to be an archaeologist.” “What’s an archaeologist?” – and so the conversation developed as I explained about ‘digs’ and cleaning ‘finds’ and categorising each ‘find’ and putting them into labelled plastic bags. I explained how this could build a picture of what happened a long time ago. She went over to find Steph to ask about her bone. When she came back, she said with some glee, “You are wrong, Steph says it is part of a clay pipe that men used to smoke. Can I wash it and put in a plastic bag?” 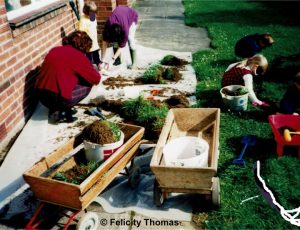 So we started our very own archaeology project, with many children getting involved with digging, washing, sorting, categorising, bagging and labelling. We had a line of washing up bowls for the children to wash, rinse and dry their ‘finds’ before putting them into the bags and carefully labelling them. The local bank very kindly donated the small transparent bags. We found many interesting things, a few examples of which are:

The children discussed their ‘finds’ with each other and the adults. The sorting and categorising had a real purpose and was done by the children with great attention to detail. All the bags with the labelled and dated artefacts in were displayed in the corridor for parents to see and discuss. It brought up memories of life on the estate and the nursery up to 50 years ago.

This was a real and meaningful activity which deepened and enriched the children’s language, observation skills, mathematical concepts, a feeling of history, and of what had happened at this place before they played and learned in the garden. It developed their personal and social awareness and gave them a sense of belonging and history. In today’s world this would be acknowledged as building on their understanding of their community. 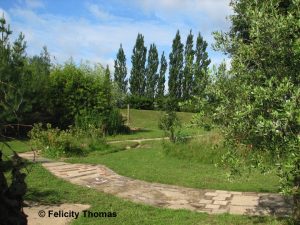 We continued to observe children in this small garden and went on to develop the outdoor learning environment to be many times larger, informed by the children’s ideas, motivations and interests as shown by these photos. 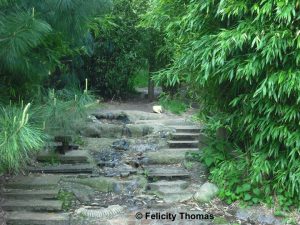 All images are © Felicity Thomas.  Images must not be used without written permission from the photographer or Early Childhood Outdoors.

4 thoughts on “Learning in the outdoors and listening to Froebel”