A few weeks ago I enjoyed watching an interview outdoor play enthusiast and preschool teacher Kierna Corr recorded with Kathy Brodie for Early Years TV (in case you don’t already know, a new interview is free to view for a week every Friday evening).  A very interesting thread in Kierna’s conversation was about changes her team in Northern Ireland had made in order to cope with making the nursery safe enough in the pandemic, which they are planning to keep.  I had noticed this as a theme in comments I’d heard elsewhere, and it seemed well worth pursuing – so I invited her to tell us more.

In this post, Kierna shares some of the changes that were made, focusing particularly on their time outdoors each day, describing how sometimes small solutions to the current problem actually turned out to provide significant long-term improvements to the way they do things.  Isn’t it great when the negative requires new thinking that turns into a positive – remember that correlation between necessity and invention?

Positive outcomes from dealing with the pandemic can crop up in all sorts of surprising places, as was also demonstrated in Janet Packer’s previous post on this blog back in May 2020, called Silver linings.  Seeking and bringing out the small positives amidst such a prolonged period of difficulty and sadness might help to nurture resilience and forward thinking, so it would be really interesting to hear more on this subject –  please feel free to comment at the end of this post.

Kierna’s interview with Kathy can be found here (subscription required) and Kierna’s long-running blog Learning for Life can be followed here: www.nosuchthingasbadweather.blogspot.com

Teaching in a pandemic – what did we change? by Kierna Corr

I’m a full time nursery class teacher in a unit in a primary school. It’s a single form entry school so I’m the only early years teacher in the school as in N. Ireland preschool is not part of the Foundation Stage.

Our children finished school due to the lockdown on Friday 13th March and didn’t start back until August.  Many were wondering how we would operate nursery and settling in without parents allowed in the building.  We saw lots of children going back to preschool across Europe and in England but the difference was that our children would all be new to the class when starting in September, so it was unrealistic to think they could be left at the school gate by their parents. 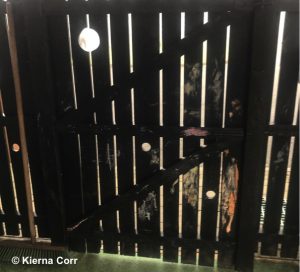 A much better settling in process

My colleagues in Foundation Stage and the nursery staff came together in June to plan how we could make the transition back to school as easy as possible for the children who had left nursery in March but would now be returning to the school as P.1’s.  We decided to start the children back in nursery for 2 days before moving onto P1 in two groups of 15, either Monday and Tuesday or Thursday and Friday.

This plan worked so well that we have decided to keep this next year too.  It was great to see the children skip back into the playground after so long at home and it also gave the Foundation Stage staff a chance to get to know the children in an environment they were comfortable in.

Normally the new nursery children come for a visit in June but this couldn’t happen this year, so instead we found other ways to connect before they started.  We use an app called Seesaw to communicate with parents.  We got all the parents signed up in June/July and were able to gather information about each child through this and send them photos of the nursery, so they could see it before visiting.  We moved the ‘taster session’ to August and over two days brought the children and one parent in as small groups of 6/7 for an hour.

We are fortunate to have a side gate that leads right into the playground and the children can be dropped off there each morning and if they needed to they could say goodbye through a hole cut into the gate.  We have a sanitiser unit at the gate for children at their height. 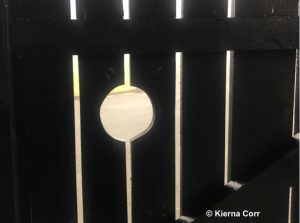 We have been basing ourselves outdoors and just going inside for snack or dinner on days that are not too cold.  We are fortunate to have a covered verandah area outdoors, so we can be outside even on wet days but children don’t have to be in the rain unless they want to be.  Normally we have large buckets of wet weather gear that the children help themselves too if needed.  They all bring in a pair of wellies to leave in school but this year, due to Covid, we realised each child needed their own set of rain gear.  Another colleague numbered her sets and allocated each child a number so we used this idea and got a storage unit that is designed for shoes but is perfect for the rain gear that each child was allocated.  Again, this is something we will be keeping even when the pandemic is over.  It has also meant that the children learn which number label is theirs, such as “I’m 22”. 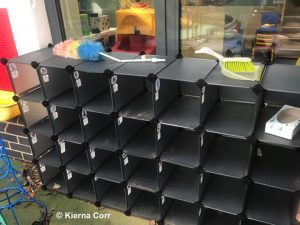 We also started to use a second gate in the playground at home time so that parents/carers could come in one gate pick their child up from the back door and then go out through a different gate, allowing the next parent to come in.  We have been in our nursery since April 2006 and we had never used this other gate!  We now use it to go out with the children to visit our on-site wooded area and it means we don’t have to go near the school car park.  I have no idea why we didn’t do this before!

One big bonus this year has been that everyone learned how to put their own coats on by the beginning of October as they were taking them off and on again a lot with all the hand washing, so we had time to teach the Montessori coat flip.  This has made a huge difference as children have been able to get their coats on for sometime, instead of waiting for their parent/carer to put them on for them.  This will also stay as part of our practice, along with the hand washing; we even managed to get an outdoor portable sink that I had wanted for many years and this means muddy, wet children are no longer traipsing into the bathroom. 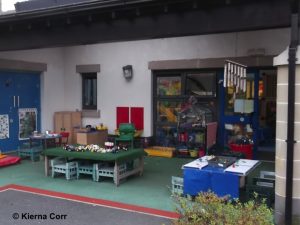 A more satisfying day for everyone

The ebb and flow of the day is much smoother without the rush to try and offer outdoor play, indoor play, clearing the room for dinner etc.  Both myself and my main assistant have been fortunate enough to visit settings in Sweden and Finland, and we feel that we now have a similar feel to our day as we experienced there – it is much more relaxed and child led.  We are getting opportunities to interact with small groups of children much more and the play is much deeper than before.  It is amazing to watch how the play changes over the course of the day and as children go inside for snack and dinner and their peers play with different children.

I can see so many positives that have become our everyday practice as a result of the pandemic and that we will be keeping for good.  By staying outdoors we can allow the children to come back to their play after dinner, and now we have at least another hour of outdoor play each day! 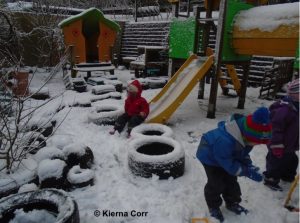 All images are (C) Kierna Corr and must not be used without written permission from the photographer or Early Childhood Outdoors.

2 thoughts on “Teaching in a pandemic – what did we change?”