This week I read an excellent post by Elaine Bennett, Sit still, be quiet – and mind the gap! on the Right From the Start website and found myself equally perturbed by the approach described of the Nuffield Early Language Intervention programme that is being heavily funded by the Government for children in Reception.

Everything I have experienced about education in the outdoors, at every age and stage over more than 30 years, has shouted out how good being active outdoors with others is for stimulating, enabling and driving the acquisition of language that has meaning and relevance (the only language that is going to stick).  Surely this is a more effective means of supporting real language acquisition, and one for which there is plenty of sound research evidence (the role of movement in language generation, real things to talk about, talking with others in informal and motivating contexts, talking for thinking – just to begin with).

In this week’s post, lifelong Frobelian and Froebel travelling tutor Felicity Thomas continues to aid us in working out how to nurture young children in partnership with the outdoors by offering us another of her ‘Tales From A Nursery’.  This tale richly demonstrates the relationship between thoughtful outdoor practice and meaningful language acquisition, that creates the powerful and flexible tool that language is meant to be.

With the aim of helping us to explore how the deep attunements and valuable perspectives gained by studying Froebel’s thinking and practices can manifest in everyday practice outdoors, Felicity’s article explains why her staff team wanted to include a camera obscura in their outdoor space, and tells one of the many imaginative (and active!) stories that were generated through being together in it. 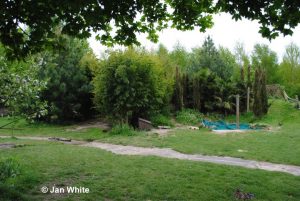 Tales from a nursery: learning and living in nature by Felicity Thomas

I was a teacher and head teacher at a Nursery school in Norfolk.  The Nursery was a 1930’s building surrounded by a large acreage of land.  When I arrived this land was ‘school field’ – very open and flat and rarely used by the neighbouring school.

The Nursery had a small south-facing strip.  Over the years the Nursery team and I expanded and developed the garden to provide a large outdoor space that was natural, diverse, with varying topography, areas that were open and other areas that were hidden.  We created boggy and dry areas, running water and a still pond.  Any built areas were designed to use local natural materials. 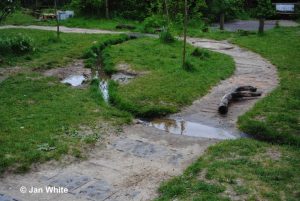 All my teaching life I have believed in children learning and living outdoors.  This influence came from my Froebelian roots, having been to a primary school with all Froebel trained teachers and then studied to be a teacher at the Froebel Institute.  I was always passionate about children being inspired by their natural world and how they, as another living creature, were an intrinsic part of this world.

I loved watching children closely observe tiny insects and carefully return them to their home under the log or lying on their backs watching the clouds scud across the sky, using their imaginations to develop cloud stories.  These examples of children ‘being’ are so important in our world today when children often do not have time to ‘be’ but are required to fit into an adult ordered and provided world. 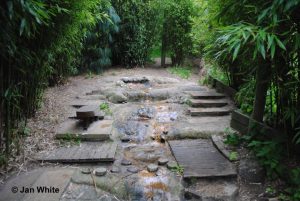 Children finding out for themselves by asking their own question and exploring answers to these questions, enables them to make connections about life, learning and meaning that no ‘taught’ lesson can do.  Froebel said:

“To have found one quarter of the answers by his own effort is of more value and importance to the child thanto half hear or half understand it in the words of others” (The Education of Man, F. Froebel 1826:86).

Here is a story of two children being inspired outdoors and creating their own song and game.

The development of the camera obscura came from the senior leadership team really wanting children to experience awe and wonder, to help them speculate about why things happen the way they do and sometimes defy all our expectations.  Why do our friends appear to be standing on their heads when we see them through the pinholes at the side of our camera obscura?  Why do the trees, clouds and birds that appear above the camera obscura make pictures on the floor inside?

What are the pictures and can we turn them into stories?  This is what happened with two little girls who were transported into their own imaginary world. 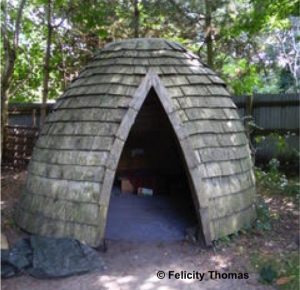 “L wanted to come into the camera obscura.  She hadn’t seen it with its wooden pinhole roof on.  It was very dark inside.  The floor was covered with a thick, white sheet and the door was closed by two blackout curtains.  She crept in with E and I said,

‘Sit on the logs and be very quiet, see what you can see on the floor when I shut the curtains.’

The space became very dark but gradually forms and shadows appeared on the white floor.

The curtain opened and someone looked in, the light flooded in and the ‘dragon’ disappeared.  L laughed and said,

‘The dragon is scared of the light’.

L and E both started to dance on the white floor, jumping on the dragon and making up a song: 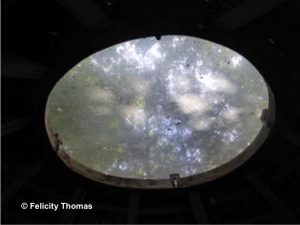 They laughed and danced and sang.

I closed the curtain and the space was deeply dark.  Gradually the ‘dragon’ appeared on the ground moving his head from side to side.  L and E shrieked and said,

They laughed and hushed together.  L said,

‘Turn on the light’.

I opened the curtains and the ‘dragon’ disappeared.  L and E leapt up and laughed and stamped and sang:

They played this game together in the camera obscura for nearly an hour.” (Personal Journal: Norwich, Thomas, May 2011). 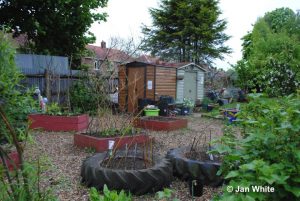 This story shows how children’s creativity can be expressed through experiencing new and interesting things that still have a basis in the world they understand.  They make connections between light and dark and the dragon, and this stimulates their creativity with song and literacy.

Everything in the garden invited the children to engage with it. They relished the real tasks of harvesting, pollarding trees, pruning shrubs, gathering the correct-sized sticks for fire making, peeling the birch bark as a fire starter, and cutting the hazel for necklaces and jewellery making.

This was their garden and they understood and cared for it, echoing the Froebelian principle of living and learning in nature.

You can see previous posts from Felicity on the ECO website:

Learning in the outdoors and listening to Froebel

All images are © Jan White or Felicity Thomas.  Images must not be used without written permission from the photographer or Early Childhood Outdoors.