Liz Edwards, founder of Muddy Faces, and I met way back at the beginning of this century (2001 I think it was) and we’ve been working in an increasingly collaborative way ever since – the core of this began 10 years later with our shared love of and belief in MUD.  This year, International Mud Day is 11 years old and, with the launch of two new Nordic translations, our Making a Mud Kitchen booklet is now in 11 more languages than English!  As a joint celebration of Mud Day 2020 and the ongoing collaboration of ECO and Muddy Faces, I’d like to share with you the marvellous journey of this unassuming but much travelled little booklet.

In 2009 at the World Forum for Early Childhood Care and Education in Belfast the idea of International Mud Day had its beginnings. Two members of the Nature Action Collaborative for Children, Gillian McAuliffe from Western Australia and Bishnu Bhatta from Nepal, discussed the challenges children faced when playing in mud in each other’s context.

The history of Making a Mud Kitchen by Professor Jan White

In 2011, Jan White and Liz Edwards launched a Mud Play initiative aiming to greatly increase the understanding, importance, value and range of experiences from mud play as continuous provision, and to support practitioners to achieve this.

Prior to this date only a few settings in the UK provided mud play or had a mud kitchen.  Our Making a Mud Kitchen booklet was launched online as a free downloadable resource for the 3rd International Mud Day in June 2012.  Within a year it had been downloaded 20,000 times globally, and 17,000 free copies of the printed booklet (funded by Muddy Faces) were also distributed at outdoor focused conferences and training events across the UK.

The response was breathtaking and feedback so very positive.  Proof of the success of the initiative is in the results: at the five year point, ‘mud kitchens’ had become fully mainstreamed, with a very high proportion of education settings of all types, in all UK countries, having a mud kitchen in their outdoor provision. 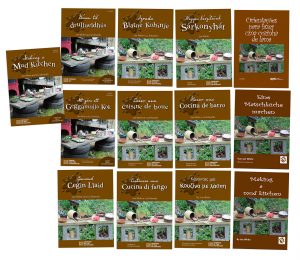 Making a Mud Kitchen is now in 12 languages!

At the time we launched our 2nd edition in 2018, well in excess of 65,000 downloads of the booklet had been made worldwide and Making a Mud Kitchen had been translated into 9 other languages:

The booklet was also printed in Portuguese and, thanks to Lucia Santos and APEI, widely distributed with Children in Portugal’s magazine and in Italian, where it was included for free with both Infanzia and Bambini early years magazines through the efforts of Michela Schenetti at the University of Bologna.

Mud play is now the norm not the exception

Thousands of young children across the UK can now expect this wonderful provision in their outdoor space every single day.  This simple, straightforward and easy to implement idea has actually opened up so much more of the outdoors than at first meets the eye.  Providing a mud kitchen has enabled child driven play and given young children access to deep exploration of both natural materials and human life – the very things that they are centrally driven to find out about!

Making a Mud Kitchen is now in Swedish and Icelandic!

Now we are super excited to announce that, for this year’s International Mud Day on 29th June, we are adding two Nordic versions of the booklet to the international family!

Thanks to our good friends in Sweden and Iceland we will be adding free downloads to Muddy Faces’ Outdoor Hub:

Each year, Liz and the team at Muddy Faces add free resources to the Mud section of their Outdoor Hub.  This year they are collecting good tips about mud play from settings and schools around the UK, which should make a really valuable resource for us all.

From Muddy Faces on the Mud section of the Outdoor Hub:

And of course, there’s an active Facebook group Mud Kitchens and Mud Play, set up by Liz Edwards and managed by Niki Willows and Claire Chapman.

2 thoughts on “Making a Mud Kitchen grows ever more international for Mud Day 2020!”