This week’s ECO blog post is an intriguing reflection about the power of life outdoors as a two-year-old for adding verbal language to his toolkit for thinking and sharing experiences.  As a writer, I am very aware of how I run a whole range of word-strings back and forth in order to say what I want to convey as I compose both written and spoken sentences – so this insight resonates strongly with me.

Helen Coles is a parent at Beatle Woods Outdoor Nursery near Balsall Common, owned and managed by Rachel Macbeth-Webb.  Thanks to both of you for sharing such a fascinating piece of practical research that digs further into how spending lots of time being and playing outdoors might be working at a profound level during early childhood.

The joy of moving forward in thought by Helen Coles

My two year old recently went through a phase where he developed a rather cute stutter.  As his language moved beyond ‘want big apple’ to ‘it got a handle on it to fly high and go smash’ he sometimes paused and looped on the first word,  ‘it, it, it, it, got a handle on it’.  While he is on repeat he has that look on his face that I’ve seen before.  Outdoors. 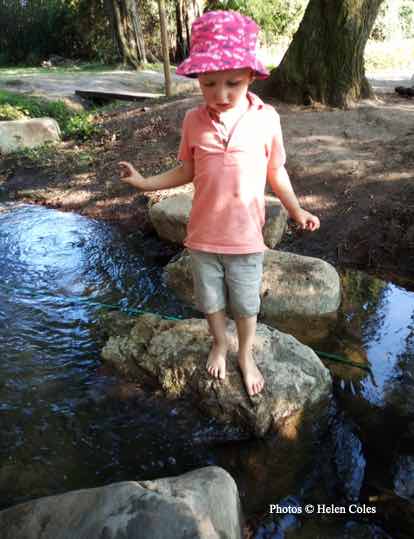 It’s the look that I’ve seen on his face as he chooses a path down a slope.  This way is so steep that it will be fun but I will have to sit on my bottom and slow down.  That way is less steep and I can carry on running fast enough to chase my big brother.  This way looks good but oh, there is a fallen tree, not worth trying.  His speech is now complex enough that he needs to plan ahead.  He is no longer merely reacting by naming the object in front of him.  He has to know which words will follow that first ‘it’ or ‘I’.  He has choices as to which idea he wants most to express.  Should I tell Mummy this stone is a red dragon or do I want to tell her this is a dragoon flying like the one in the book this morning? 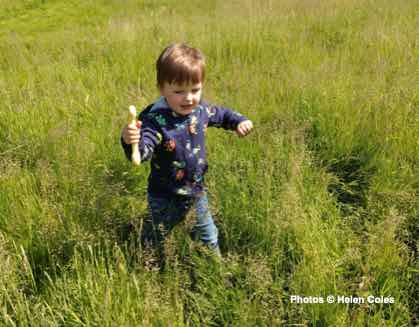 Now of course there are situations indoors that require him to plan and choose.  But even our toy-strewn floor doesn’t give him the challenge and real sense of consequences that the natural environment does.  When I see my two year old run headlong across an uneven field I see a fluency of movement that he can only achieve by thinking ahead.  Imagining where he will be in the next moment’s time.  In the case of my four year old, I see the same expression when he has to chose which branches of a tree are strong enough, which ones will lead him strategically to the part of the tree he is aiming for.  When you play outdoors you become a planner.  When you are a planner your speech can move into a new world of possibilities. 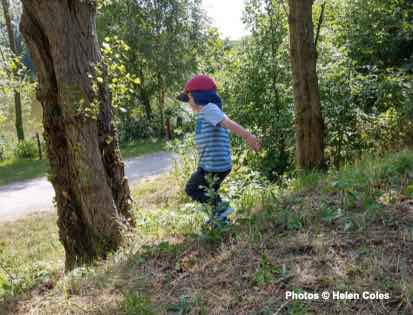 I can’t prove it, but I’m as certain as I can be that when the time comes, years from now, for my son to sit down and write his first stories for school that look will flit across his face.  No matter which subject he is about to launch into, I know that for one brief moment before he starts there will be a look in his eyes.  One that has leaves in.  Mud in.  Pebbles and puddles.  Hills and balancing logs.  Choices and consequences.  The joy of moving forward in thought.  Planning and choosing.  With the tiniest echo of the wobbly toddler who first practiced those skills playing outdoors.

Photos are all © Helen Coles. Please do not use without prior express permission

1 thought on “The Joy of Moving Forward in Thought”