I’ve long wanted to find, support and create mechanisms for sharing the knowledge that is being generated through research at universities in a way that enables practitioners to deepen their own thinking, provision and practice outdoors.  So I’m really pleased that this strand in the work of ECO is developing so well!

In recent months I have, on behalf of Early Childhood Outdoors, provided three letters of support for research funding proposals at the University of Dundee (Dr. Alex Barrable) and Manchester Metropolitan University (Dr. Abi Hackett and Professor Kate Pahl), two of which have included in-kind contribution if the proposals are successful.  This means the meshwork being able to both contribute to the studies and benefit from their findings, as well as supporting wider dissemination.  What a great role for us to be able to play!

We also now have 10 ECO blog posts sharing a wide range of research topics and with several invitations to participate in current projects (I’d like to remind you of Natalie Canning’s ongoing invitation to join her current research on children’s empowerment in play).

This new post from Dr. Christina MacRae, researcher and lecturer at Manchester Metropolitan University, especially fits our overall aim of digging deeper into what it means to be in the outdoors.  Christina’s description of how she came to look more closely might well provoke you to further consider the experience of being outside and young children’s relationship to the world outdoors.  For me, her story especially brings attention to the way that children are constantly in fascinating dialogue with their environment, as well as each other.  This shift in perspective should make us more aware of the active role of materials – and to start noticing that ‘objects’ are not as passive as we think!

In breaking news, our long-postponed Where Are The Babies: exploring outdoor provision for children from birth to two research seminar will be held online as a Froebel Trust webinar on Saturday 20th March 2021.  Booking information is due to be sent out from The Froebel Trust next week to all current ticket holders and there will be lots of additional places – we will keep everyone up to date in next week’s ECO blog post. 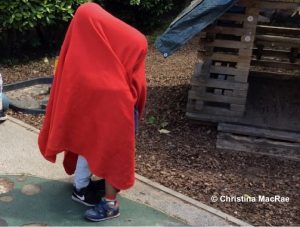 The red blanket: a tangle of agency by Dr Christina MacRae

I am a member of the Children and Childhoods research group in the Faculty of Education at Manchester Metropolitan University.  My research project “The Sensory Nursery” was an internally funded research project that took place between 2017-2019.  Its focus was on 2-year olds in classroom settings and explored how young children use sense to make sense of their worlds.  Since the expansion of funded places for eligible 2-year olds in 2009, there has been a gradual increase in 2-year olds in nursery classrooms.  As Tanya Richardson has noted in a previous ECO blog, this is also related to anxieties about language delay which has in turn led to an intense focus on the importance of children’s speech.

In order to resist this, the video clips that I made during this “research-residency” focussed on children in motion.  The story of the red blanket emerged when I was trying to analyse a piece of film where I had followed two children who were playing outdoors with a red blanket, and I had found myself slowing the film down in order the try to see more exactingly what was happening.  Two children had covered themselves in a red blanket and were moving around a hard-surfaced section of the outdoor space.  The tussling, giggling and sometimes shrieking bundle was navigating through bikes, balls and other moving children, and then it found its way to area of bark-covered ground where the bundle collapsed and the two children rolled over and over each other still wrapped in the blanket. 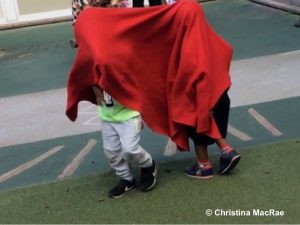 Slowing the film down did not have the desired effect of making it easier to work out precisely how the action unfolded.  Instead, it suddenly made me aware of the infinite complexity of movement and responsivity that was taking place between the blanket, the children’s bodies, and the ground upon which they were supported.  No longer were the two children playing with the blanket, but the blanket seemed to play a lively part in the action itself.  In mastery narratives of play individual children learn ‘about’ objects that they choose to play with.  However, when I watched the movement unfold in slow-motion, what I found myself noticing was how much the children’s self-activity was a form of (co)motion.

Often well-intentioned child development theories and training materials seek to accentuate children’s capacity for agency.  In doing so they tend to emphasise how children learn through ‘discovery’.  In this child-centred journey adults are often tasked with supporting children in their efforts to ‘master’ the world of concrete objects, so that children can discover the knowledge that we, adults, already have.  Running counter to this mastery tale, the red blanket play event can tell another story.  This way of approaching children’s play is very like Abigail Hackett’s suggestion (as described in her ECO blog post) that “place might be a conversational partner”: only, in this story, it is the red blanket that could be considered as taking part in a dialogue. 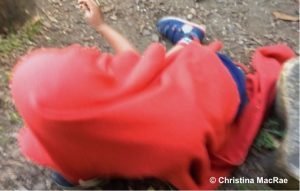 Here the child is not at the centre but is in-relation.  Enveloped in the blanket, children move in-relation to the fibrous quality of the cloth and its weight.  They respond to the way that it slips and folds in-relation to their moving bodies as they travel around the playground (and when they later collapse as a moving blanket/bundle onto the ground).  Nicola Kemp and Jo Josephidou talk about the outdoors as a “space of possibility” in another ECO blog, which also struck a chord with the way that this event took place.

This kind of play emerges in what the famous geographer Diane Massey calls “the thrown-togetherness of space” (2005).  Possibilities are opened through our (often-times chance) encounters with our environment, and it is through our unfolding responses that we become knowing beings.  Seen in real time, the writhing bundle of the blanket and children rolling over each other on the ground could easily be described as “rough and tumble play”.  If I had just noticed them on the ground, I very likely would have intervened at this point as my instincts would have told me that one of them might get hurt.  However, as I was transfixed by this bundle of (co)motion, I continued filming. 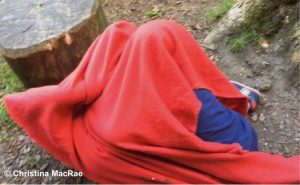 However, it was only when I started to replay the film over and over in slow motion that I saw something rather different.  This ‘something’ was more dance-like.  Here, the movements of the limbs in relation to each other, to the ground, and to blanket were full of care (careful as opposed to rough).  There were moments where I glimpsed intentional actions, for example when the arm of one child pushes the other’s chest as both bodies fall to meet the ground.  However, any intentionality was always shifting with infinite speed as one human body encountered another, and as the human bodies responded to the non-human blanket, to the ground and to gravity.  In every encounter, things always have the potential to re-align the body in a new direction.  This in-the-moment responding is partly an improvisational impulse when a sensing body responds dynamically to the encounter as it moves.

Elsewhere I have written about this as a form of attunement, a quality that, as adults, we might learn from children.   It can also be recognised as a form of sentient knowledge that is produced when a body senses something other to itself in the moment of contact.  When slowed down this improvisational element has a dance-like quality.  Trevarthen (2002) has famously noted the way that caregivers of very young children often engage in dance-like exchanges of reciprocal responsivity.  The slowed film of the child/blanket/bundle reminds us that this tangle of agency extends beyond dyadic relationships between adults and children, and that it also includes more-than-human matter.

Trevarthen C, and Malloch S, (2002) Musicality and music before three: Human vitality and invention shared with pride, Zero to Three 23(1): 10-18

If this approach to looking at and thinking deeply about the play of two year olds intrigues you, a more detailed description (free to access published paper) of Christina’s research project can be found here:

Christina is continuing this research through a further project funded by the Froebel Trust: Listening-2: Investigating sensory-motor learning in two-year olds, using Froebelian principles to deepen understanding of two-year-old children’s sensory-motor relationships with their environment.

Last June, Christina and her co-researcher Professor Maggie MacLure held a Froebel Trust webinar on findings from this project, exploring Froebel’s idea of ‘unfoldment’ and presenting an example from the research of ‘watching children jump’.  The very apparent contagiousness of jumping led to the wonderful expression of ‘companionable jumping’.  I’ll definitely be asking them to tell us more about this in a future ECO post!

All images are (C) Christina MacRae and must not be used without written permission from the photographer or Early Childhood Outdoors.

1 thought on “The red blanket: a tangle of agency”