I love the way things come along at just the right moment!  Just as I started talking with Tanya Richardson about the need for language assessment and intervention to take place outdoors where children are most relaxed and ready for conversation, stimulated to verbally share thoughts by the real world they are encountering, I also read a really interesting research paper that I’d recently been sent.  The overlap in research interests (usefully coming from different perspectives) was immediately obvious – and I find the perspective Abi brings to be highly compelling.  She certainly makes a strong case for supporting the development of children’s many languages outdoors, and the idea of ‘looking sideways at language’ is really intriguing!

Dr. Abi Hackett is a Research Fellow in the Education and Social Research Institute (ESRI) at Manchester Metropolitan University, researching young children’s literacy and meaning making practices.  She is particularly interested in the role of place, materiality and the body in young children’s lives, with her work being located mostly in communities and non-formal learning spaces.  As her research is mostly with children aged under three years, she experiments with visual, sensory and ethnographic methodologies for understanding tacit and inchoate aspects of young children’s lives.

What a great addition to our discussion about language development in early childhood – I hope we can keep this particular conversation going through the Early Childhood Outdoors meshwork. 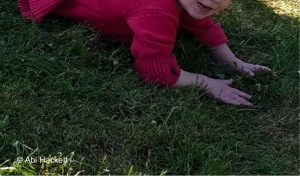 Currently in the UK and beyond, there is a great deal of interest and research around the role of adults in developing young children’s communication.  Readers are probably all very familiar with the advice to talk to your baby, read to your toddler, interact at meal times and find other ways to increase symbolic verbal interactions between adults and children.

For the last three years, I have been carrying out research on 1-3 year olds in community settings, motivated by a conviction that by focussing only on the role of adults in socialising young children, we are getting a very partial picture.  Reading Tanya Richardson’s recent ECO blog titled ‘It’s not just what you do but also where you do it!’, I couldn’t find myself agreeing more with this message.  My research has looked at the role of bodies, places and objects in very young children’s lives, and in particular, how these things might shape their language and communication.

This research builds on existing work on the importance of movement, gesture and bodies for young children’s talk, and work (such as Tanya’s) that argues for the importance of place as to how and whether children talk.  As a contribution to this conversation, I would also like to suggest it may be productive to consider place as a conversational partner in language; by this I mean, young children’s talk does not always need to be directed at humans for the purpose of conveying information.  To illustrate this point, I would like to share one small story about gaze, a landscape and a ghost.  Through this story, I invite readers to consider where else children’s talk might be directed, different reasons why children might be motivated to talk and what else (apart from adults) might be involved. 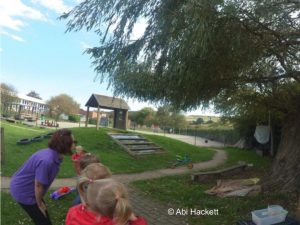 Walking in the outside play area of the nursery, the teachers tell the children they can see a ‘ghost’.  Over on the hills, a large white tarpaulin flaps in the wind.  The children stand on upturned crates (usually used for sitting on during snack time), straining to see ‘the ghost’.  As they spot it, they say “a ghost” and “o’er there” to each other and to the adults.  Gradually the others wander off, until only Tina remains, still standing on her crate and slowly eating an apple, whilst gazing at the ‘ghost’.  Very slowly she stands, gazes, munches her apple, and every couple of minutes adds another part to her unfolding story.

Stood on the crate still, she seemed to be thinking hard.

Tina’s apple crunches, and the wind ruffles the nearby willow tree.  She climbs down briefly from the crate to fetch a breadstick, then stands back on the crate, watching the horizon.  The distant white tarpaulin flaps on the hillside.

“Ghost can’t get me”

Language in Tina’s ghost story seems to emerge in between, and to draw impetus from, munches of apple and the crunch of breadstick, the movement and sound created by the wind, and her extended gaze towards the horizon, with each of these factors being inextricable from the words spoken.  In this sense, it provides an example of how inter-twined young children’s talk is with place.

Importantly, Tina’s ghost story did not seem to have an intended human audience.  I, as a researcher, was merely standing quietly by whist it unfolded, amidst the crunching of the apple and the flapping of the tarpaulin.  Listening to Tina’s ghost story from a few steps away, I had a sense that interrupting would have curtailed the story.  Tina’s gaze to the horizon seemed significant in the production of the story.  These observations, about audience and gaze, offer a counter to the dominant advice in early years pedagogy that adults should work to engage young children in direct eye contact in order to encourage them to speak.  The event also challenges the usefulness of adult questions in always being what drives children’s talk. 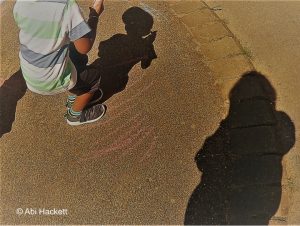 We could say that here, language is not just a matter of mastering a system of abstract rules under the encouragement and guidance of adults.  Instead, it is about creatively getting involved in more-than-human worlds; things such as the horizon and the flapping tarpaulin, the wind and the crunching apple.  Outdoors settings have huge potential to make this sort of ‘getting involved in the more-than-human world’ available to children, and perhaps this is part of the reason there is increasingly accumulated evidence for connection between language and place, and particularly for how productive outdoor settings can be for early childhood language.

In order to invite place to join in the conversation with young children and their talk, I have (together with colleagues in our co-written free access paper) suggested that it might be worth “looking sideways at language.”  By this we mean, instead of making talk the central focus, start instead with bodies, movement and spending time in places.

Developing young children’s language practices must start with a trust that children already ‘have it’, at least as potential to be unfolded.  The task of educators, then, is to create the conditions in which talking feels easy, comfortable and right.  My research indicates that situations in which there are frequent possibilities but little obligation for children to talk, coupled with an avoidance of trying to pin down the intended audience and function for talk, are some possible conditions for this.  Outdoors is not some magic panacea for this (and I would concur with Tanya’s points about a mix of familiar and unfamiliar experiences of places), but it is often a fruitful way in.

Abi’s article published in 2014 on theconversation.com, Don’t stop toddlers running around museums; it could help them learn, resulted in a large international impact via social media and has been read over 2500 times in range of different countries!

See the previous posts in this thread on language outdoors:

Photographs are all (C) Abigail Hackett and must not be used without written permission from the photographer or Early Childhood Outdoors.