Our wonderfully successful collaborative research webinar Where Are the Babies, hosted by the Froebel Trust, created lots of conversation in the very active chat running alongside the presentations and panel discussions (scroll down in this link to find these recordings).  Lots of people also gave their thoughts in the survey monkey sent out afterwards, in response to the question “What would you like to see happening nationally for increasing the attention on babies and toddlers outdoors?”  We are in the process of collating all the many comments and suggestions to consider what to focus on for working collectively and motivating action, in true Early Childhood Outdoors fashion.

But it was clear that the first thing we could do was to pick up on the issues that generated a lot of comment through a series of posts on the ECO blog.  One of the themes that stood out was initiated by Carol Duffy’s research into babies’ and toddlers’ self-generated everyday rituals: both in their play and during their walks with adults.  So I asked Carol to share with us some more of her enquiry into what turns out to be a really deep and important idea, and which deserves much more attention than we might realise.  This wonderful piece is the first in a sequence that we plan to post over the coming months – enjoy!

This post looks at the many play rituals that young children generate when they are able to visit the same places in their neighbourhood many times over and in an unhurried way.  Regularly and playfully encountering the places and people immediately around the home and nursery is really significant in helping young children to grow up with the sense that they are part of their locality and belong to their community.  In fact, I consider providing outdoor experiences beyond the garden to be the 7th ingredient of excellent outdoor provision (see chapter 7 in my book Playing and Learning Outdoors (3rd end. 2020 Routledge). 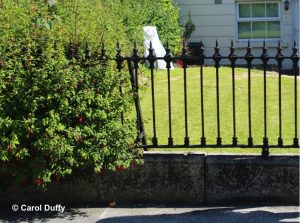 The Wondrous Walk by Carol Duffy

The journey had become familiar to her now; at 4years of age she had already memorised the 2-kilometre route to her granny’s house.  The route had not become familiar through any geographical understanding, but by a playful ritual that led her from one play event to another until she arrived at her grandmother’s door.  A ritual that made this frequent trek an adventure rather than a chore.

The paths, railings and steps along this urban route had became her linear playground and the hedges, weeds and stones that lined the streets were the loose parts that she played with along the way.

Her status as eldest of three provided a much-enjoyed freedom of movement not yet achieved by her siblings.  While the baby nestled in the pram her younger brother yo-yoed between stints in the pram and short toddles.  This slowed down the pace considerably which suited this 4 year old very well, for it gave her more time with places and spaces that caught her attention.

She felt confident moving from the pram handle, her secure zone, for she knew she could retreat to it whenever needed.  She had quickly learned the requirements for this freedom; it was based on mutual trust but she was yet to understand that.  She knew to always stay on the side of the path farthest from the traffic, not to go too far ahead or ever out of sight, and never cross the road without holding onto the pram.  Coming straight back when her mother called her was still something she was working on, except of course when she wanted to, like when she was passing the big scary house with the angry dog, or sometimes when her mother was telling one of her exciting stories or singing one of her favourite songs. 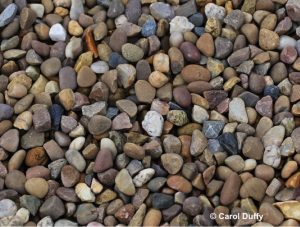 Like an athlete out of the blocks, she tried to be first out the garden gate to get to the neighbour’s railings.  If she hurried it would take the others a little while to catch up and give her more time on there.  A step up onto the flat bar at the bottom of the railings and then hand over hand and foot over foot until she came to the greenery bursting out through the iron bars and blocking her way – bushes that were full of dancing ballerina flowers (fuchsia).  If she held on tight she could throw her head back and swish her long hair until she felt like a dancer herself.

Onto the path now as far as the little shore, its cover was the shape of a horseshoe and she checked to see if her foot still fitted on it.  Crossing the big road together they reached the road of the Victorian houses with big driveways and matured tall trees – once scary house was passed it was a treasure trove of a place.

Twigs and leaves trapped in gateposts were easy pickings she liked the sound she could make as she ran a stick along the railings, or the umbrellas she made with the big leaves.  Today the big beach pebble driveway was too much to resist.  It only took a few small steps into the forbidden zone of a private house to be rewarded with that wonderful sound – the crunch of stones underfoot.  It was worth the short stern glance of her mother as she called her on.  The feel of the little stone that had somehow made its way into her pocket might have helped too. 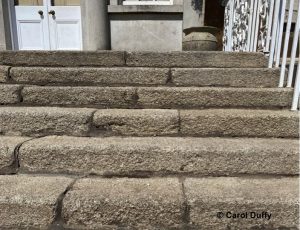 The little lane where no traffic was allowed was next.  Cracked concrete made lots of lines that were perfect to jump over.  She tried not to let her feet touch the lines when she jumped over them.  Often she pretended to be a horse jumper, and her mother made great clip clop sounds for her as she trotted down the street.  The low path that ran down one side of the lane meant she could be an acrobat balancing with outstretched arms as she walked on the path’s edge.

There was a bounce in her step now, as she knew what was waiting for her around the next corner.  Double steps where you could go up one side cross in front of a huge door and go down the steps on the other side.  On a sunny day the granite steps sparkled in the sunshine.  She called them the Princess steps, for to her it was her castle.  Up and down, up and down until her mother could wait no longer.

The exercise was taking its toll as her legs began to tire, but as they turned the corner the canal came into sight and she knew it wasn’t far now.  Bookended by two bridges once the slip path was taken the rule was to hold onto the pram. The canal always held a special mystique, the grassy tree-lined banks gave a chance to see the swans and count the ducks, or watch leaves floating down the water, or make little ripples with found stones plopping into the water.

As she gripped the handle of the pram, she felt her mother’s hand enclose hers.  There was family history at this part of the canal and no chances were taken.  As a young child this mother had fallen into the canal herself.  She was saved by a stranger on the bridge who saw her red hair floating on the water.  Her daughter was fascinated by the story and could point out the exact spot where it happened.

Leaving the canal led them to her grandmother’s street, her thoughts turned to the hugs and the goodies that she knew would be waiting for her.  Holding onto the pram she watched out for the lamppost that signalled her freedom to run ahead and get to her granny’s first.

At four years old she had no idea of the rituals involved in this walk, or the warmth of the memories they would instil in her for a lifetime.  And how do we know?  Because I was that four year old, and while sixty years have passed I can still trace that walk in my mind as well as I can trace it with my feet.  The rituals of my early childhood walks have stayed with me all my life, though dormant for many years as life unfurled they could always be easily and fondly remembered, in reminiscences with siblings and friends, or rekindled as I found myself travelling through that part of the city, or shared as family stories with my children. 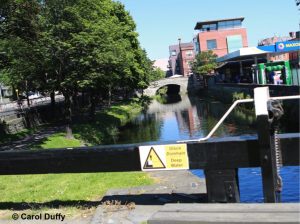 For my mother three more children arrived before we left that part of the city.  Many more different rituals were developed and different routes explored.  Of course, not every walk was so perfect and trouble-free: trips and tears, fights and falls, wet and weary challenged the status quo.  There were no doubt many worries pressing for this mother’s attention as she walked her children to parks and playgrounds, schools and social gatherings.  Yet we remained oblivious to her worldly worries, deeply content at the attention she showered on us, play opportunities she provided for us, and the rich environments she shared with us.

She used games and songs to teach us how to be safe and responsible on city streets.  When tiredness crept in she kept our tired legs moving by telling stories creating climatic episodes that weren’t revealed until we had reached the next lamppost.  As we got older, she had a rota system of a bike, a trike and a scooter, and the ever-popular seat at the end of the pram on the go for the longer walks.  She taught the older ones to look out for the younger ones.  Unbeknown to the young mother she instilled within her children a sense of identity and belonging, a love of place and people.  A loving connection that was to last longer than a lifetime. 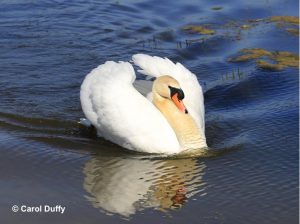 Unbeknown to me these walks were the foundation of the skills and confidence I gained to explore the city of my birth and further afield.  The stories of our walks and rituals were passed down from generation to generation.  As my children grew to adults and became parents themselves they had to endure the stories again as I shared them with my grandchildren.

I thought they were surely bored of them now until…  On my sixtieth birthday my grown children surprised me by bringing me on a walk, retracing the steps of my childhood along the very walk I have brought you the reader on.   Researching on Google maps, they identified specific spots where they could playfully re-enact scenes from my childhood: canal walk complete with rescue; picnic of 60’s goodies (not so goody now); railing walking; etc. etc.  As before progress was slow because of play.

Just like my mother before them they had made the ordinary so very extraordinary.

A timeless priceless gift that cost nothing, but meant the world.

You can enjoy more of Carol’s writing in her previous ECO blog posts here:

All photographs are copyright Carol Duffy and mist not be used without written permission from the photographer or Early Childhood Outdoors.

2 thoughts on “The Wondrous Walk”